I am always on the lookout for good horror movie suggestions, especially for smaller films that may have snuck by and disappeared quietly from the public eye. Every once in awhile, you’ll unearth a true gem that way. The 2013 British found footage horror film FINAL PRAYER is one of those gems… 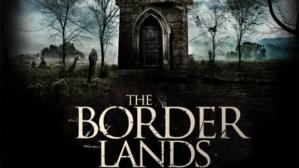 Before we go any farther, I want to mention that its original name was THE BORDERLANDS, which is both a million times better AND more fitting to the overall experience of the movie. I can’t help but think that changing it to the more generic sounding FINAL PRAYER didn’t help it find viewers at all. Everything else about this movie, however, is spot on. 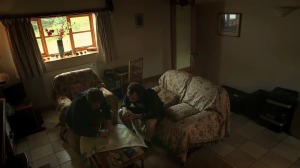 It involves a team sent by the Vatican to a remote ancient church in the boonies of Devon, England, where a young priest, Father Crelick, has reported strange goings on that may or may not be miraculous. The team is made up of Deacon (Gordon Kennedy) a Scottish priest with a troubled past who specializes in debunking fraudulent “miracles”, Gray (Robin Hill) a secular specialist hired to film the entire thing (it is the footage from his handheld camera, plus several installed security cameras that make up the film), and eventually Father Amidon, a stick-in-the-mud sent by the Vatican to speed things up. 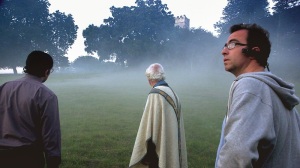 Deacon and Gray, though at first stand-offish, slowly warm to each other as they explore the old church, drink in the pub together, and experience the general weirdness of the small village they’ve been sent to. The chemistry between the two leads is off the charts, and the acting throughout is superb. Robin Hill is one of my favorite British actors, and he is really appealing here. (Interesting fact: he is also one of the editors of the masterpiece film KILL LIST!)

As the story unfolds, the seemingly quick debunking process gets sidetracked by all sorts of creepy findings, which Father Amidon would rather sweep under the rug than report up the chain. The fun buddy comedy feel of the first part is subsumed in weirdness, subtly at first, inexorably building. Deacon and Gray find hidden passages that haven’t been opened in centuries, stumble across the diary of a mad priest, and all the while Deacon just can’t figure out how Crelick could have faked the footage that brought them there in the first place. 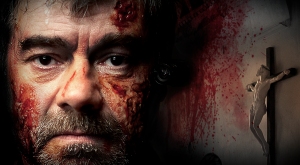 When it all comes to a head, some severely horrific stuff goes down. I don’t want to spoil any of it for you, so will just say that there are hints and clues throughout that coalesce into one of the most memorably horrible final scenes I’ve seen in years.

Writer-director ELLIOTT GOLDNER knows how to put together an engrossing and scary film, and didn’t forget to bring some real humanity and depth to the characters. Even as things in the story are getting more and more out of hand, it’s the PEOPLE we care about. That’s how it should be in ANY good movie, and more horror films would do well to remember that.

So, if you like good acting, great writing, crumbly old churches, cosmic horror, ancient paganism, found footage done right, and that feeling of being wrung out by the end of a film, then FINAL PRAYER is a good bet for you…

My rating: A GHASTLY-GREAT MUST SEE!