In the opening scenes of the excellent New Zealand horror comedy Housebound, written and directed by first-timer Gerard Johnstone, we meet the main character, Kylie (Morgana O’Reilly), while in the midst of perpetrating an extremely botched ATM robbery.

Kylie is all scowls and sneering, never saying a word for the entire first 5 or 6 minutes of the film, as we watch her get arrested, booked, found guilty, and then given an 8 month sentence of house arrest AT HER MOTHER’S PLACE. The look of horror on Kylie’s face at this news is hilarious, and as she argues for prison time instead we know we’re in for a dysfunctional reunion.

Kylie is brought to her mother’s huge, seedy old house (where it turns out she spent much of her childhood, eventually running away) and fitted with an ankle monitor by no-nonsense private security officer, Amos (Glen-Paul Waru). It doesn’t take long to see that she and her slightly batty mom, Miriam (Rima Te Wiata), have been on the outs for a long time and that neither woman is particularly excited about the new court-ordered living arrangement.

And that’s when the ghost shows up.

This movie is ridiculously entertaining, and even passes the American Werewolf in London test: namely, if one were to remove the humor, would the horror elements survive by themselves as a serious scary movie? The answer here is a resounding YES! It’s filled to the brim with great creepy set pieces that echo various classic haunted house flicks, with twists and turns galore. I don’t want to delve too far into the plot–half the fun is watching it unfold and go in unexpected directions–but just the idea of being legally stuck in a haunted house is such a juicy setup, and only the tip of the iceberg.

I must say that though it could have been a straight horror film, I’m really glad it’s a comedy because it’s funny as hell in that darkly irreverent way of many great Kiwi and Aussie genre movies. So. Many. Good. Lines… 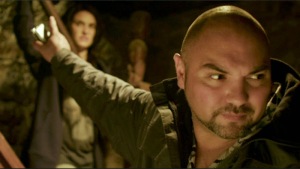 All of the performances are strong, but it’s Kylie and Amos who steal the show. Kylie has gotten so used to punching her way out of predicaments that she’s at a loss of how to deal with the seeming supernatural weirdness unfolding around her. Turns out that security officer Amos is an amateur ghost hunter, and when the two of them reluctantly team up, it’s a real hoot. Though he’s not the most effective supernatural investigator who ever recorded an EVP, he ends up as a voice of conscience for Kylie.

If you like having your horror mixed with character-based black comedy, then you will have a lot of fun with this movie. As over the top as the humor and scares get, Johnstone is smart enough to be subtle when it comes to Kylie’s realizations about herself and her personal failings. Thus, she seems like a real (extremely angry) person and not just a cog in a screenplay. YAHOO!

I can’t wait to see more from all involved.

BONUS LINKAGE
In the spirit of great horror comedy, here are two shorts to send you home with:

Adieu for now, beloved readers. Keep checking back over the next 9 days, as there are a few guest bloggers on the roster and all sorts of macabre merriment to be had…