When I was a child, there was a great Saturday monster movie host on local Detroit TV named Sir Graves Ghastly. He was like a friendly uncle who dressed like Dracula and showed lots of black and white classics, from the legendary Universal horror films to the whacked-out 50s paranoia alien attack movies. One of my unfulfilled goals as a youngster was to have a drawing of mine end up on his weekly art Ghoulery.

In any case, there I was digging all things monster, never getting too freaked out since it was always Saturday morning when Sir Graves was on, and is there a less scary, more sunny time than SATURDAY MORNING. I think not. Unfortunately, my bravado caught up with me around age 8 or so, when I was allowed to stay up late with a babysitter one evening to watch the giant radioactive ants movie THEM! It scared the living daylights out of this little nerd, and in the wake of the nightmares that followed, I swore off any and all things scary.

I was able to stick my toes back into the monster pool in my early teens, and it’s been full steam ahead (aDREAD, maybe?) ever since. This experience left me very sensitive to not wanting to share anything too scary with my kids, so that they can enjoy age appropriate spookiness without scars…

My boy is 6 and into all things Star Wars and superhero, but kept telling me he wanted to see something scary, probably to be like me (which is pretty darn cute). But, what to start with? MONSTER SQUAD is awesome, but it’s got some real feeling of danger to it in places. THE MUNSTERS is too goofy, etc. What was a father to do?

That is Bill Cipher, an inter-dimensional demon-thing-guy from the Disney animated series GRAVITY FALLS (created by super genius Alex Hirsch) . Bill is triangular, top-hatted, super whacked out and cosmically horrifying– in a cute sort of way. Here, check out this clip of Bill meeting one of the townsfolk of Gravity Falls for the first time:

The basic story of GRAVITY FALLS is simple. 12-year-old twins Dipper and Mabel Pines are shipped off one summer to stay with their Great Uncle (or “Grunkle”) Stan at his rickety tourist trap THE MYSTERY SHACK, where they hang out with oddball local denizens and discover that the woods surrounding the shack are full of monsters, gnomes, and general cosmic weirdness. The adventures are fun, the characters funny (with great voice work all round), and the overall story arc is ingenious and pretty original. It’s the kind of plot that could have been turned into a grown up horror epic pretty easily just by taking out the cartoonish antics.

Seriously, this show worked as a perfect intro for my son. We watched the whole run (two seasons) together and cracked up, talked about various mysteries, and just had a great time. And I’ll tell you—it manages to work up enough of a head of steam while still remaining funny that it qualifies fully as Cosmic Horror in my book, which is pretty cool for a kids show from Disney. 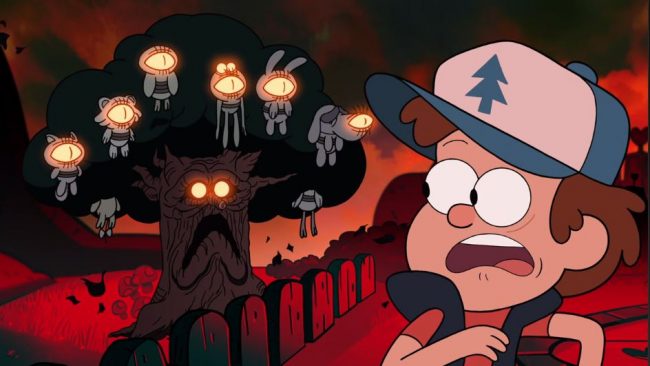 Anyhoo, maybe check this out if you have kids just starting to be interested in spooky stuff. It’s a lot of fun. (For the record, I’d TOTALLY watch this show even if I didn’t have children.)