This year, as part of our Halloween celebration, I asked a whole bunch of the greatest living horror writers to tell us about the three SCARIEST books or stories that they’ve ever read. The thinking here is, if something scares THESE folks, it is probably awesome Many authors have been kind enough to send in their picks, which will be coming out in these final days before the All Hallows. I can’t wait to share all of them!

Today, I want to mention one particular writer, who answered this call by writing a full-on essay! T. E. Grau is his name, and he’s the  author of the collection THE NAMELESS DARK, one of the best books published in the past year, and all-around cosmic horror maven. 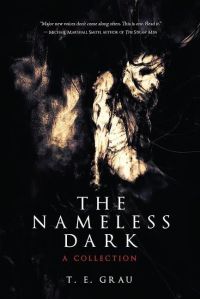 Here, to kick off the SCARIEST series, are Mr. Grau’s picks:

In putting together three stories that frightened me, I need to first offer up two caveats:

Caveat One: Most Horror and Weird fiction doesn’t scare me, even though I know it’s written with the intent to unsettle or frighten. This isn’t me being some blustery tough guy, it’s just the way it is. I imagine spooky stories don’t scare most people, as it’s fantasy. It’s fiction. Fictional. Meaning, not real, and usually so far off the grid of reality that the only emotions stirred are wonder, awe, and a sense of excitement when I come across a particularly well-rendered piece of Horror or Weird fiction. The stories that scare me, REALLY scare me, have some basis in reality. They could happen, if certain circumstance aligned. This crosses dangerously close to Crime or Suspense Fiction, as human beings are the most terrifying thing on this planet.

Caveat Two: Give a glance at the titles below. If you haven’t read any of these stories, then please do not read the descriptions, because there will be spoilers. Ruining any of these three tales would be the most horrifying thing of all.

With that out of the way, my Big Three of Scary Stories:

1. “A Good Man Is Hard to Find” (1953) by Flannery O’Connor. My wife Ivy and I were just talking about this story again the other night, about how masterful it is, taking a family road trip peppered with humor and homey touches, and then flipping it into one of the most horrific tales I’ve ever read following an auto accident where no one is initially hurt. The car ends up in the ditch, and then The Misfit happens by, bringing with him all the darkness and cruelty of a life we never saw lived, and this line, which might be one of the most perfect ever penned: “‘Nome, I ain’t a good man,’ The Misfit said after a second as if he had considered her statement carefully, ‘but I ain’t the worst in the world neither…'” Flannery has never received her due for how grim and pitch black some of her work is, how Horror. Even more tragic, she has never been declared arguably the greatest American fiction writer in history.

2. “The Events at Poroth Farm” (1972), by T.E.D. Klein. To this day, several years after reading this novella, I cannot tell you why this story is so terrifying, why its stayed with me for so long, but it is, and it has. Reading it is an immersive experience, like finding yourself emerging into a patch of woods, or a vacant lot, or a room in an old house, and feeling a sense of foreboding and dread that you cannot pinpoint, but also cannot shake. It’s just wrong, somehow. Terribly wrong. That is Poroth Farm. Klein – who would have ascended to the throne of Horror/Weird fiction had he not unofficially retired from writing in the 1980s – wrote a long but delicate piece of almost pure atmospherics and geographic dread, set amid an overgrown farm near a fly speck town forgotten by most maps. This is a slow build, accented by the creak of trees and the snapping of sticks, influenced by the grunting of animals in the barn, the looks of the strange religious couple who own the property. “The Events at Poroth Farm” is rural Horror and the quiet Weird at its finest, born in those forgotten places just off the highway that I know so well from my childhood, that continue to influence much of my own writing.

3. “Conversations in a Dead Language” (1989) by Thomas Ligotti. I’ve read a lot of Thomas Ligotti. Like, a whole hell of a lot. Probably most of his fiction (not much of his poetry, to my great shame). And while he’s had many stories (“Our Temporary Supervisor,” for example, or “The Frolic,” or “The Town Manager” or “The Red Tower” or “Gas Station Carnivals” or…) that have stuck out and stayed with me, none of them creeped me out in the setup, nor frightened me at the end like “Conversations in a Dead Language.” A cloistered, mama’s boy mail carrier (vaguely recalling Norman Bates) looks forward to Halloween each year, because of the children that willingly come calling to his door, especially an odd brother and sister, who first show up dressed as a bride and groom, and then return a year later, with only the sister showing up the third year, for reasons that will be monstrously obvious, but certainly not spelled out. From the upbeat, playful narration, to the occasional baby talk of our loner (“knifey-wifey” “meezy-weezy”), all of which is offset by frightful undercurrents, this a masterwork of true literary Horror fiction that should be read each and every All Hallows’ Eve.

Thank you, Mr. Grau! To find out more about TEG’s nefarious wanderings, check out his website, THE COSMICOMICON. Also, read his collection–it’s GREAT. (Alden, the main character of the first story, “Tubby’s Big Swim”, captured my imagination back in the summer and refuses to give it back…)