BROODHOLLOW BY KRIS STRAUB: WHAT IS WRONG WITH YOUR TOWN?!

Today’s pick is the web comic BROODHOLLOW by Kris Straub, which has been going since 2012. It tells the tale of a luckless encyclopedia salesman named Zane, who suffers from a kind of obsessive-compulsive disorder that he refers to as the Pattern. He finds himself in the bizarre-ass little town of Broodhollow, which is full of patterns, secrets, and horror of its own. 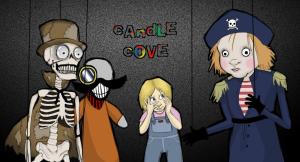 Kris Straub is perhaps best known as the author of the single best (in my opinion) creepypasta of all time, CANDLE COVE, and that was what initially drew me to this comic. The awesome creepiness and dark humor is what keeps me coming back. VERY HIGHLY RECOMMENDED!