A lot of what makes effective horror scary is the same as what makes a good joke funny: there is a seemingly normal setup (teens go to cabin for the weekend) that points toward a seemingly normal end point (they have fun and go home), only to be circumvented by something unexpected (ghosts eat them). In the case of a joke’s punchline, the unexpectedness tickles our sense of the absurd, with horror it triggers a recoil in our fight/flight mechanism. I am a big fan of non sequitur humor when it is done well, where the preposterous nature of any given punchline is taken to an extreme, seemingly random place. Non sequitur horror is a little more difficult to pull off, because not every random image elicits fear (rubber ducky eats the teens).

There is a form of non-sequitur that CAN be quite scary, and that is the kind that retains at least some shred of implicit logic, but where that logic is broken or somehow feverish. “Dream logic”, in other words. The site definithing.com defines dream logic as:

1. the nonsensical logic one posesses while dreaming that makes perfect sense until he or she wakes up
2. information one magically/automatically possesses in a dream without having learned it before

Some of my favorite horror material operates within the dream logic space. By jettisoning “waking logic”, this kind of horror can hit on a more subconscious level, which can be very potent. Here are a few favorite examples of dream logic horror I’ve flipped over in the past:

“You come here all the time,” Steven said. “All your holidays are here.”

The main character of this story (from the anthology HOUSE OF FEAR, edited by Jonathan Oliver), Ken, is taking his two young daughters, Katie and Holly, on a holiday to a family camp near La Tranche-sur-Mer, France. Everything is off about this trip, it all just feels “wrong”. Ken and his daughters never see anyone else, except for a camp employee named Steven, who seems to be suffering from worse and worse burns every time they run into him. The ending of this is seriously one of the most horrifying things I’ve ever read.

“Procession of the Black Sloth” by Laird Barron

This novella (from Barron’s classic first collection, THE IMAGO SEQUENCE) follows a corporate espionage specialist, Royce, as he is sent to Hong Kong by his employers at a huge multinational corporation, to sniff out the spy who may be stealing company secrets. He is installed in a sprawling expatriate apartment compound peopled by a motley crew of oddballs. He is soon overwhelmed by weirdness of the highest degree, which slowly envelopes his reality until reaching a horrifying climax of paranoia and spiritual horror. SO GOOD!!!

Everyone knew our town was dying, long before we truly saw it. There’s a certain way a piece of fruit begins to wrinkle and soften, caves in on itself around the edges of a fast-appearing bruise, throwing off the sickly-sweet scent of decay and death that always attracts some creeping hungry thing.

The title story of her second collection, this story is a masterpiece of dream logic being used to make thematically deep and painful points about humanity (mothers and daughters in this case). At first, the story of a small town literally twisting into a bizarre facsimile of itself seems almost impenetrably odd, yet hypnotic. It just builds and builds to a brilliant finale that suddenly adds meaning to all that has gone before, and it is powerful punch to the gut.
FILM, TELEVISION, and VIDEO

In Gozu, Miike takes the Yakuza gangster genre of Japanese films and adds Lynchian madness to this tale of a younger Yakuza member tasked with taking out his mentor who appears to be going mad. Really, every moment of this feverish film is bizarre, but somewhere in the twisted, blackly comic imagery, it also leaves room for a powerful look at friendship and love. Really, there is no other movie like Gozu.

Sapphire and Steel was a half hour BBC program that aired between 1979 and 1982, starring David (Man from U.N.C.L.E.) McCallum and Joanna (Absolutely Fabulous) Lumley as the titular pair of otherworldly “Agents”, who appear on earth from time to time to deal with rifts in time/space and other bizarre things. The show is just plain odd, from the very get go. The first episode starts cold, well into the story, with no formal introduction to the alien pair or the human children they are helping. This effect carries throughout, as we watch these two operatives deal with dark forces. One of the weirdest (coolest) ideas of S&S is that Time itself is their biggest enemy—they are constantly having to deal with spillovers from the past and future, which threaten great harm on the world. The science is non-existent, really (the refer to Steel, Sapphire, and Jet as being elements, for one thing), but the tone and generally sinister nature of their storylines makes it a show well worth seeking out.

HERE is a YouTube channel that has all six “assignments” from the three seasons of the show (each assignment is broken down into 6 half hour episodes). 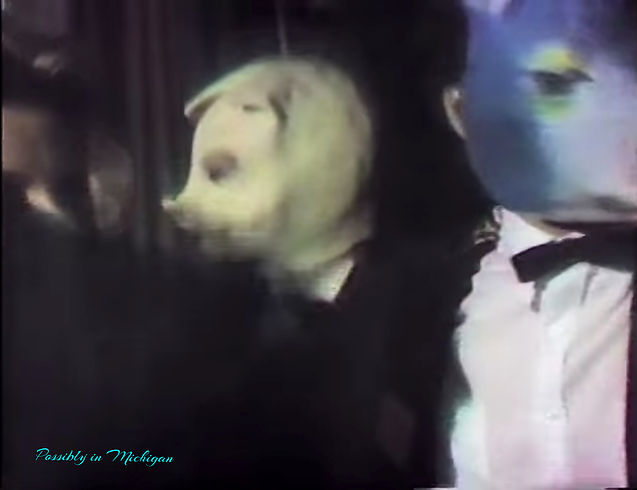 Possibly in Michigan by Cecelia Condit

The realm of purely non-narrative art film can be very surreal and dread-inducing. Some pieces possess such utter strangeness, yet a seeming logic, that they burrow right into the psyche. Possibly in Michigan by the artist Cecelia Condit is one big nightmare for me. Everything, from the music to the performances to weirdly banal shopping center it was filmed in add up to just creep me the heck out. Well done, I say!

HERE is an excerpt, to check it out firsthand…