MURDER FOR BEGINNERS: WHERE TO START WITH TRUE CRIME READING 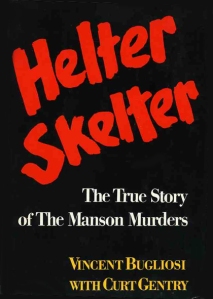 Just as I can trace my decades-long love for short horror fiction to the one-two punch of reading “The Father Thing” by Philip K. Dick, followed by my Mom giving me her copy of Stephen King’s NIGHT SHIFT, so can I trace my decades-long on again, off again affair with true crime. I was sick at home one day in high school and read both HELTER SKELTER by Vincent Bugliosi and Curt Gentry, and THE FAMILY by Ed Sanders in one giant sitting. They both deal with the Manson Family murders and they effed me up for weeks!

So, before we get delving here, I want to come right out and say that I’m conflicted about talking up true crime books, especially for those who haven’t yet read any. There is a level of TRUE horror in these things that borders on way too much at best, and can trigger bouts of despair in people with nihilist tendencies, and can trigger survivors of abuse, etc.

For me, I can only dabble every once in awhile in this stuff, but keep being drawn back like iron filings to a really terrifying magnet…

Once upon a time, True TV had an amazing website that covers just about everything in the world of true crime, from gangsters to spies to serial killers and beyond, called Crime Library. It was chockfull of incredible articles written by real journalists specifically for the site. Unfortunately, it was taken down toward the beginning of 2015. Fortunately, the Wayback Machine has a snapshot of its contents from just before it went down, which you can find HERE. It is a treasure trove of crime articles, and will give you a good overview and an opportunity to see if this up your alley. WARNING: this may lead to you losing an entire weekend…

Bookwise, there are plenty of powerful titles out there that kick major ass. The two Manson books already mentioned are a great place to start. Ann Rule (who sadly passed away last summer) is a giant in this field, with tons of classics. THE STRANGER BESIDE ME, for me, is the single most interesting and bizarre true crime book I’ve ever read. It deals with serial killer Ted Bundy’s rampage, and was started before he was caught. When he finally did get caught, Ann Rule had the shock of a lifetime: she knew him personally! Bundy was about as bad as it gets, so it’s a pretty heavy book, but extremely intriguing. PRACTICE TO DECEIVE and DEAD BY SUNSET are couple other Rule classics.

The most horrible murderer I know of was a guy named Albert Fish, active in the first part of the 20th century. It really does not get much worse than this fellow, and even while trying to remember he was deeply disturbed, it’s hard to find much humanity in the guy. DERANGED: THE SHOCKING TRUE STORY OF AMERICA’S MOST FIENDISH KILLER by Harold Schechter does an amazing job telling this story. It is NOT for the faint of heart.

If time travel is ever built in my lifetime, after taking out Hitler, it would be a toss up for me who I would go after next: Mr. Fish, above, or H.H. Holmes, one of the subjects of THE DEVIL IN THE WHITE CITY by Erik Larson. Damn, this guy was another true monster. He built an actual murder hotel in Chicago toward the turn of the 19th century, and was responsible for somewhere between 27 and 200 murders! Larson’s book is AMAZING, and I highly recommend it.

Fun side note: Homes went to the University of Michigan, where I work. You can still find his picture in the hallway of the med school, in his class’s graduation photo! Here’s an article from Michigan Today.

The most recent great true crime book I’ve read is THE MURDER ROOM by Michael Capuzo. It deals with the Vidocq Society, a members-only crime solving group made up of retired and active detectives, forensic specialists, medical examiners, etc., who meet once a month in Philadelphia to try and crack cold cases around the world. The book follows the three founding members, William Fleisher, Richard Walter, and Frank Bender, all highly determined and eccentric crime fighters. Though it deals with plenty of murder and mayhem, this one is a bit more uplifting in the sense that we are with the crime solvers for the majority of the book, rather than the killers.

These are just a few ideas to get you started. There is a whole world of really horrifying true crime stuff out there. Like I said, though—I’m a BIG horror fan and even I have to limit my reading in the genre because it can be so harrowing.