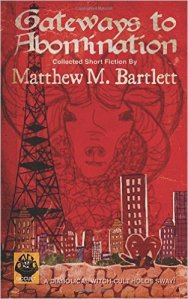 Matthew M. Bartlett is an author born in Connecticut in 1970, who currently resides somewhere in Western Massachusetts. His endlessly amazing novel/collection/freak-out GATEWAYS TO ABOMINATION (GTA) is simply one of the the best and freshest works in all of the current weird horror renaissance.

Here is a review I wrote for GTA on Amazon, which sums up what I love about it:

It is all of this: a kind of a novel, a kind of a collection, a month of fever dreams, a Satanic theme and variation rhapsody, frighteningly hilarious, laugh-out-loud scary, full of PERFECT imagery, and crackling with the energy of the best writers in ANY genre.

It deals with the luckless town of Leeds, MA, and its godforsaken denizens (both human and “other”), who have fallen under the influence of the diabolical ghost radio station WXXT, which itself seems to be run by a cabal of back-from-the-dead-and-ready-to-PARTY forebears, who describe themselves at one point as:

The pieces that make up the book sometimes feel like full stories, sometimes feel like fragments, but even the shorter ones each still contain some kernel of theme, imagery, “plot”, or vibe, that keeps the overall story going (sometimes in non-Euclidian directions) and are all bathed in refreshingly surrealistic atmosphere and black humor.

Much of the dread is of the “creeping” variety and extremely effective, but then things will explode in a shower of guts, dirt, and worms. Bartlett has Poppy Z. Brite’s way with making disgusting imagery really pop and sizzle, Adam Golaski’s (at his best) way with dream logic and diabolical inference, and Livia Llewellyn’s ability to just effing go for it! Such. Good. Writing.

I can’t say enough about this book. Seriously, if you love weird-ass horror with writing and ideas that are as brilliant as they are bonkers, and enjoy a good creep-out, then you should read this and its related brethren, THE WITCH-CULT IN WESTERN MASSACHUSETTS and the chap book RANGEL.

Mr. Barlett was kind enough to agree to an interview, which was really nice of him…

Before we get too far into this, there’s something that needs to be asked first: Are you fully human, or maybe some kind of occult hybrid ghoul or some such? It’s just that you write with such authority…

You sent me your phone number with the interview questions. I’ll call you with the answer to this one, or…I could probably look up your address and just, you know, show up.

I have never read anything quite like GATEWAYS TO ABOMINATION, and I’m pretty sure that’s because there isn’t anything like it out there. Part of what makes it so shocking is that you seemingly “came out of the gate” with it. How long have you been writing in general, and what was the genesis of the book?

I started writing in college, mostly poetry. Before that I wrote a parody or two in high school—I wish I still had the one I did of “Leatherstocking Tales” by James Fenimore Cooper. It was brutal. Whenever I tried my hand at fiction, though, it was terrible. In 2005, inspired by a friend’s humor fiction blog, I started up a horror fiction Livejournal page whose overarching theme was this radio station run by revenants—it was a way to write fiction without the pressure of having to write long narratives. Little by little, though, a narrative started to emerge. A lot of the vignettes in GTA started out as Livejournal entries. I started out posting nearly every day, and then trailed off, doing posts every once in a long while.

There are a lot of viscerally horrifying images and events throughout GTA, but also a surprising amount of humor. Somehow, the black comedy actually tends to increase the feeling of horror, and the building of dread. Can you say anything about that aspect of your writing?

It came out kind of instinctively; I’d think of something that made me laugh, and since I had an audience of about five people at the time I was writing, I wouldn’t second guess just putting it in there. Ultimately I think humor, the surprise of it, can add to the feeling of disorientation.

Another aspect of GTA that stands out is its almost “cubist” construction, in that there is an overall story line going on, while at the same time the stories/chapters/interludes don’t necessarily follow from one to the next, nor use exactingly stable imagery. How in the world did you come up with that?!

It came from listening to music, in particular concept albums, where certain themes would be repeated, and songs would have Parts 1, 2, and 3, and so on. I also liked the idea of placing them out of order. I don’t know exactly why. It was almost by accident that a few stories linked to hang a ghost of a plot onto the book.

Based on your written work so far, it’s obvious that you have built quite a strong ‘mythos’ around the occult goings on in Leeds, MA, with lots of detail and backstory. Do you plan to continue to root your work in that world (a la Jeffrey Thomas and his Punktown books), or do you have something else in mind?

I’m bursting with ideas for Leeds. Here and there I stray, but for now I can’t help but return there over and over again.

Along those lines, can you tell us what you are currently working on, or what you have coming out next?

My next book will be a sequel of sorts to GTA. It will have longer stories, some new short pieces, and a few vignettes that for some reason I left out of Gateways. CREEPING WAVES is the working title, and Muzzleland Press is putting it out. After that I’m still writing for my Dunham’s Manor Press hardcover THE STAY-AWAKE MEN AND OTHERS. These will be only tangentially, if at all, related to Leeds. I don’t think WXXT will show up in it.

Do you have an over-arching philosophy or aesthetic you operate under when it comes to your writing?

If I do, I think I would be hard-pressed to describe it exactly. Keep it dark. That’s probably the simplest way to say it.

Who are your biggest influences?

Lastly, would you please make a list of 5-10 horror stories/books/authors/movies/pieces of art that you think more people should know about? I’m looking for deep cuts here…

Glad to. I don’t know how deep I can really go here, but…

1. Author Adrean Messmer. She is a writer who is part of an Oklahoma writing and publishing group called A Murder of Storytellers. She’s got a unique voice and her work is extremely strong. Now, full disclosure – she was among the first to review GTA, and her group bought “Pharaoh” for their anthology FAED. That has nothing to do with the fact that I’m recommending her work. She’s great.

3. The story “Mannequins in Aspects of Terror” by Mark Samuels. Terrifying.

4. Seek out a radio show by Joe Frank whose title is “On The Edge”. It’s the one that starts with a monologue about a writer who moves into a house to write, and there’s a neighbor whose dog barks all day. There are a few separate pieces in the show about terms we use for death, and meditations on what death would be like if those terms—like “bought the farm”—represented what really happens when we die. The stories start off dreamy and idyllic, and then they slowly warp and descend into nightmarishly dark lunacy. It’s an absolutely brilliant work.

5. Look at the painting “The Garden of Earthly Delights” by Bosch. Just look at it.

6. The album Grave Disorder by the Damned is brilliant.

Special quadruple thanks to Matthew M. Bartlett. READ THIS GUY!!!!