BLACK JAKE AND THE CARNIES

When it comes to having creative friends, I am one blessed son of a biscuit. If I had a dollar for every insanely talented writer, musician, filmmaker or artist I’ve had the pleasure to work with in this life, I could take all you readers out for a pretty sweet dinner at Outback Steakhouse–APPETIZERS AND DESSERT INCLUDED! I assume it must be a karma thing–like in some distant past life maybe I saved a busload of scribes and lute players from a dragon or something. Or gave them a good deal on sandals. Whatever the case, holy crap am I surrounded by FREAKING GENIUSES. Seriously. It’s annoying, but definitely keeps you on your toes… 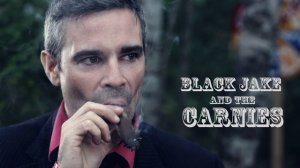 One of these ridiculously talented folks is a cat named Jake Zettelmaier. In the world of high energy, horror-tinged roots music, he’s known as Black Jake of Black Jake and the Carnies. Jake plays banjo and leads his troupe of merry acoustipunks through an original catalog of songs that span just about every kind of horror theme you can imagine: Werewolves? Yep. Ghosts? Sure. What about criminally-oriented phrenologists. Of course! Cursed radio stations? Murderers and thugs of all stripes? An evil effing chicken? Yes, yes, and YES! 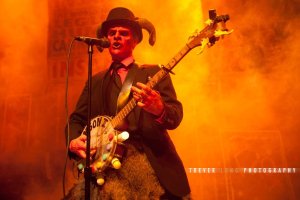 A carnies show is a thing of ramshackle beauty. Imagine a dozen or so (it seems like there’s at least 12 of them) musicians in shirt and tie all jumping around in a haze of fiddles, banjo, accordion and percussion while Jake belts out his often hilarious story songs. They’ve been known to have carnival games onstage during their sets and pretty much RULE whatever venue they attack. If nothing else comes out of this blog, I would be happy if just one new person checked out Black Jake and the Carnies.  You can listen to and buy their music at their Bandcamp page.

Here they are in action:

But, gentle reader, not only is Jake a musician of considerable abilities and mojo–he’s also a brilliant sculptor and special effects make-up artist. (In fact, we met when he kindly created the makeup effects for my first monster movie, several years ago. I even got to sit in as a guitar Carny for a year or two, which was a blast.) He’s the real deal and is starting to go public with his awesome creations with Black Jake’s Revenge.

Here are a few examples of Jake-created monsters:

Like I said, I am one very lucky dude when it comes to having talented friends so I know what I’m talking about when I say Jake Zettelmaier is an original, with one of the best understandings of the genre I’ve ever run across. Here’s to crabgrass and monsters!