Today, as I’m still under the weather and not in full writerly mode, I thought it would be fun to do a grab bag of creepy things found on the web, which you, dear reader, may not have run across. I will try and avoid stuff that’s pretty famous like Ted the Caver, Candle Cove, or The Dionaea House, etc. (If any of those don’t ring a bell, give the links a click–you’ll be happy you did!).

For the most part, I will also avoid true crime stuff, because for me there is nothing creepier but I don’t want to introduce people to that if I can help it. One time, in High School, I stayed home sick and read Helter Skelter and The Family all in one day. Worst. Decision. Ever. Thus, I’ll keep any “real” creepy stuff firmly in the realm of the paranormal (with one exception, which is too good to pass up).

Man, I LOVE it on Reddit or Facebook or whatever when somebody posts the question “What’s the scariest thing that ever happened to you?”. The answers to such a question range all over the place, from mundane stuff to the truly horrific and the obviously fake. Every once in awhile, you get a gem like The Truculent Truck. Is it a true story? Probably not. But DAMN! It’s awesome!

2. WEIRDNESS IN THE CANARY ISLANDS

I am a big fan of INEXPLICATA – THE JOURNAL OF HISPANIC UFOLOGY, especially the articles written by Scott Corrales, who is a very talented cat. The first part of his piece “Suspension of Disbelief: Baffling Paranormal Cases” has stuck with me ever since first running across it. Here’s the article. I’m referring to the case involving the two boys from The Canary Islands.

3. THE CREMATION OF SAM McGEE

One of my first memorable horror experiences was hearing the Robert W. Service poem “The Cremation of Sam McGee” read by a scoutmaster while we all sat around a big campfire. Man! Though it was middle of summer, we were all instantly transported to the icy realms of the Yukon. If you’ve never heard it read, you might enjoy this version by The Man in Black himself, Mr. Johnny Cash: 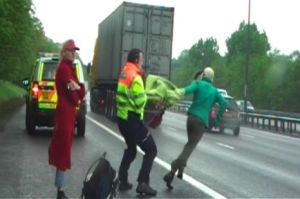 Okay, I said I wasn’t going to list any true crime stuff, but this next entry is just so effing WEIRD that, if you’ve never heard of it, it should utterly blow your mind. The first time I saw the highway footage, my little brainbone could barely take it in. I am referring to the bizarre-ass case of Ursula and Sabina Eriksson. Here is a link for the wikipedia article about them, and below is the BBC documentary Madness in the Fast Lane – Swedish Sisters, which opens with some of the weirdest undoctored video you are likely ever to see: 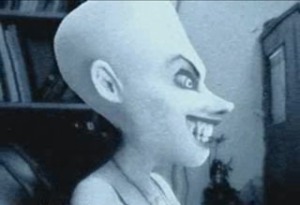 Lastly, the following short movie has my vote for best horror short OF ALL TIME. Or, at least, most original and fully-realized. It was made as a student project at the Bezalel Academy of Arts and Design in Jerusalem. The credits are in Hebrew, so I’m sorry I don’t have the filmmakers’ names for you. I’ve watched this thing a zillion times, though, and it just keeps getting better and better:

I’ll see you tomorrow, hopefully in a healthier mode and with a more focused entry of evil entertainments…