There are few sub genres of horror movie that divide audiences more than the dreaded FOUND FOOTAGE FILM. For some, like me, The Blair Witch Project was ridiculously effective and scary, while others complained that it was just an hour and a half of twenty-somethings swearing at each other while not using a tripod. True, there are a few billion terrible found footage pieces of crap, which is to be expected when you have a genre where one of the main aesthetics is for it to look like amateur footage.

I won’t go into a list of bad examples of these films, but I’m sure we all have pet peeves as far as what they get wrong: soundtrack music appearing out of nowhere in the middle of a scene that is supposed to be just some dumb-ass running around with a video camera while being chased and eventually eaten by ghosts, perfectly framed compositions that catch every important moment and line of dialog, the seemingly endless first 40 minutes where a group of unlikeable characters drive somewhere and act like jackasses (before arriving at the house/abandoned factory/cave/mine/puppet theater where they will eventually be eaten by ghosts), etc.

There are a few stand-outs that face all this head on and are presented as documentaries, or “mockumentaries” as they are sometimes called. With these films, there is an excuse for soundtrack music, perfectly edited scenes, etc.–we’re watching something made by a real documentary crew. The Australian film Lake Mungo is a sterling example of the faux-documentary-as-horror-movie, and I highly recommend it.

For my money, BY FAR THE BEST of the mockumentary horror films, and one of THE BEST scary movies of the 2000s is a Japanese masterpiece called Noroi: The Curse, directed by Kôji Shiraishi.

Noroi is presented as a finished documentary film by a famous Japanese paranormal investigator, wherein he presents his case for a bizarre supernatural mystery based on tons of seemingly unrelated events. Each of the events is scary and original in its own right, from an interview with a devastated family whose daughter has disappeared, to an excerpt from a cheesy reality TV show, a run in with a seriously deranged psychic, etc., with all roads eventually leading to something so awesome that I don’t even want to hint at it. What I will say is that, for a Japanese horror film of the mid 2000s, it doesn’t phone in even a single aspect. There are a couple dozen characters, tons of locations and different shooting styles, and great acting. Jin Muraki plays the documentarian and he is an instantly likable presence who anchors the whole enterprise and keeps you rooting for him.

I tell you, horror people, if you haven’t seen this movie, YOU ARE MISSING OUT ON ONE OF THE BEST!! The bad news is that Noroi was almost comically ignored by the world at large, when it should have been the second coming of J Horror as far as I’m concerned. 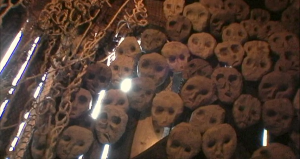 The good news is that it is widely available online for free. Here are a couple links:

This one has the “original” English subtitles included, but is a smaller overall picture size:

This one looks better, quality-wise, but you need to turn on the YouTube Closed Captioning for English subtitles:

Noroi is one of those movies that make looking for hidden, or semi-hidden horror gems worthwhile. Seriously, it just might single-handedly restore your faith in the found footage genre AND J Horror, (which has been a bit lackluster for several years now).

See you tomorrow, with more ghastly geegaws and frightening frim-fram…